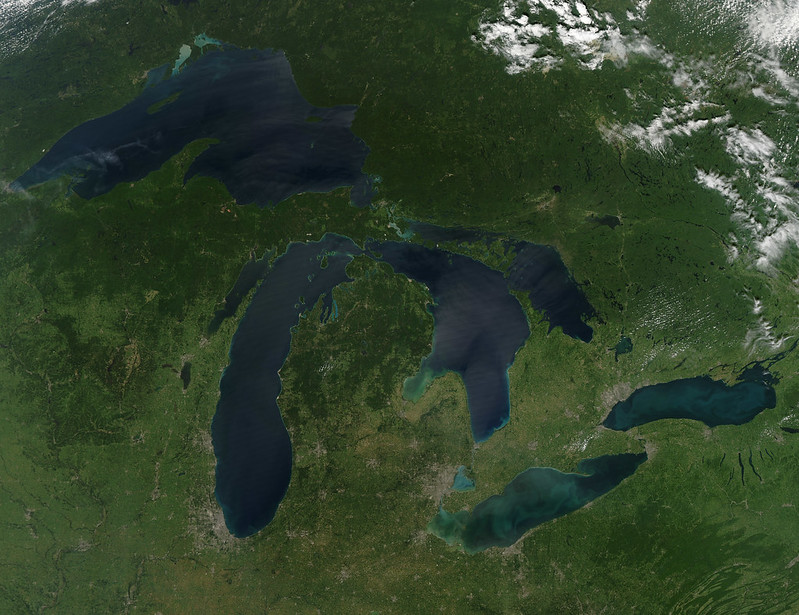 Lake levels in many of the U.S.’ Great Lakes are projected to rise steadily over the next few decades, with the Lake Michigan-Huron system potentially rising by well over half a meter by 2050, according to new research to be presented at the Frontiers in Hydrology meeting this week. Credit: NASA Goddard, MODIS Rapid Response Team, and Jeff Schmaltz

SAN JUAN, Puerto Rico —The Great Lakes in the Midwest U.S. comprise the largest unfrozen freshwater stores on Earth. But too much of a good thing can create problems. New research using the most advanced regional climate modeling systems finds that the baseline lake level for Lake Superior, Michigan-Huron and Erie are expected to rise by roughly 20 to 50 centimeters by 2050 as a result of climate change.

Like sea level rise, higher lake levels can increase coastal erosion, change navigation considerations and increase the risk of coastal flooding. More than 30 million people live along the lakes’ roughly 4,500 miles of coastline in the U.S. and Canada, including the cities of Chicago, Detroit and Buffalo, New York. Storms and flooding associated with recent record highs have already caused problems for people, infrastructure and environments.

New research to be presented at the Frontiers in Hydrology Meeting on Thursday, 23 June vastly improves upon previous predictions for how water levels in Lakes Superior, Michigan-Huron and Erie will change in the coming decades. Climate modeler Pengfei Xue, of Michigan Technological University, and his team for the first time combined a high-resolution regional climate model and a 3-D hydrodynamic model, along with hydrologic models to hone projections for lake-level rise.

The study primarily analyzed precipitation over the lakes, evaporation rates, basin runoff, and inter-lake flows to see how lake level would change by 2050, under the highest-emission scenario. The new, advanced modeling system the researchers developed allowed each of those factors to influence each other in a more realistic way than ever before modeled.

“While we know that all these components must be analyzed and projected holistically, the lake-atmosphere interactions were oversimplified in the past,” says Xue. “What we have built is a system that gives a better representation of the complexity of hydrodynamics and lake-atmosphere interaction and contributes to a more advanced modeling framework necessary for improving the Great Lakes’ hydroclimate projections. This is particularly evident through the markedly improved simulation of lake evaporation.”

While there is uncertainty in the precise magnitude of change due to underlying uncertainty in the climate models, the new modeling system projects the lake levels will increase on average as compared to the 2010-2019 period. Based on the average of the models, the water level of   Lake Superior is projected to rise 19 centimeters, Lake Erie by 28 centimeters, and the Lake Michigan-Huron system by 44 centimeters on average. But at the high end of the possible range, Lake Erie could see 54 centimeters of rise and Lake Michigan-Huron could see 80 centimeters of rise.

“Looking at the coastal hazards, their probability is going to increase and they will be more severe,” says Xue.

AGU and CUAHSI are hosting the first biennial Frontiers in Hydrology meeting (#FIHM22) in San Juan, Puerto Rico and online, 19 – 24 June 2022. Free media registration is available for online and in-person attendance at the meeting.

Registered media can stream plenaries, online-only oral sessions and hybrid sessions live in the meeting platform. Hybrid sessions will include presenters in person in San Juan as well as online participants. Traditional in-person-only oral sessions will be recorded and available to view in the online meeting platform within a week of the events. Live-streamed presentations will also be recorded and available for later viewing. Remote attendees have access to an online poster gallery.