WASHINGTON—The first known interstellar object to pass through our solar system is likely a piece of a Pluto-like planet from another solar system, according to a new study published as a pair of papers today in the Journal of Geophysical Research: Planets, AGU’s journal for research on the formation and evolution of the planets, moons and objects of our solar system and beyond.

The results may help scientists learn about the stuff exoplanets are made of and the evolution of solar systems beyond our own.

“This research is exciting in that we’ve probably resolved the mystery of what ‘Oumuamua is and we can reasonably identify it as a chunk of an ‘exo-Pluto,’ a Pluto-like planet in another solar system,” said Steven Desch, an astrophysicist at Arizona State University and an author of the new study. “Until now, we’ve had no way to know if other solar systems have Pluto-like planets, but now we have seen a chunk of one pass by Earth.”

Discovered in 2017 via the Pan-STARRS astronomical observatory in Hawaii, 1I/2017 U1 ‘Oumuamua, meaning ‘scout’ or ‘messenger’ in Hawaiian, hurtled past at 87.3 kilometers per second (196,000 miles per hour). The weirdly flat object was like a comet, but with features that were just odd enough to defy classification. 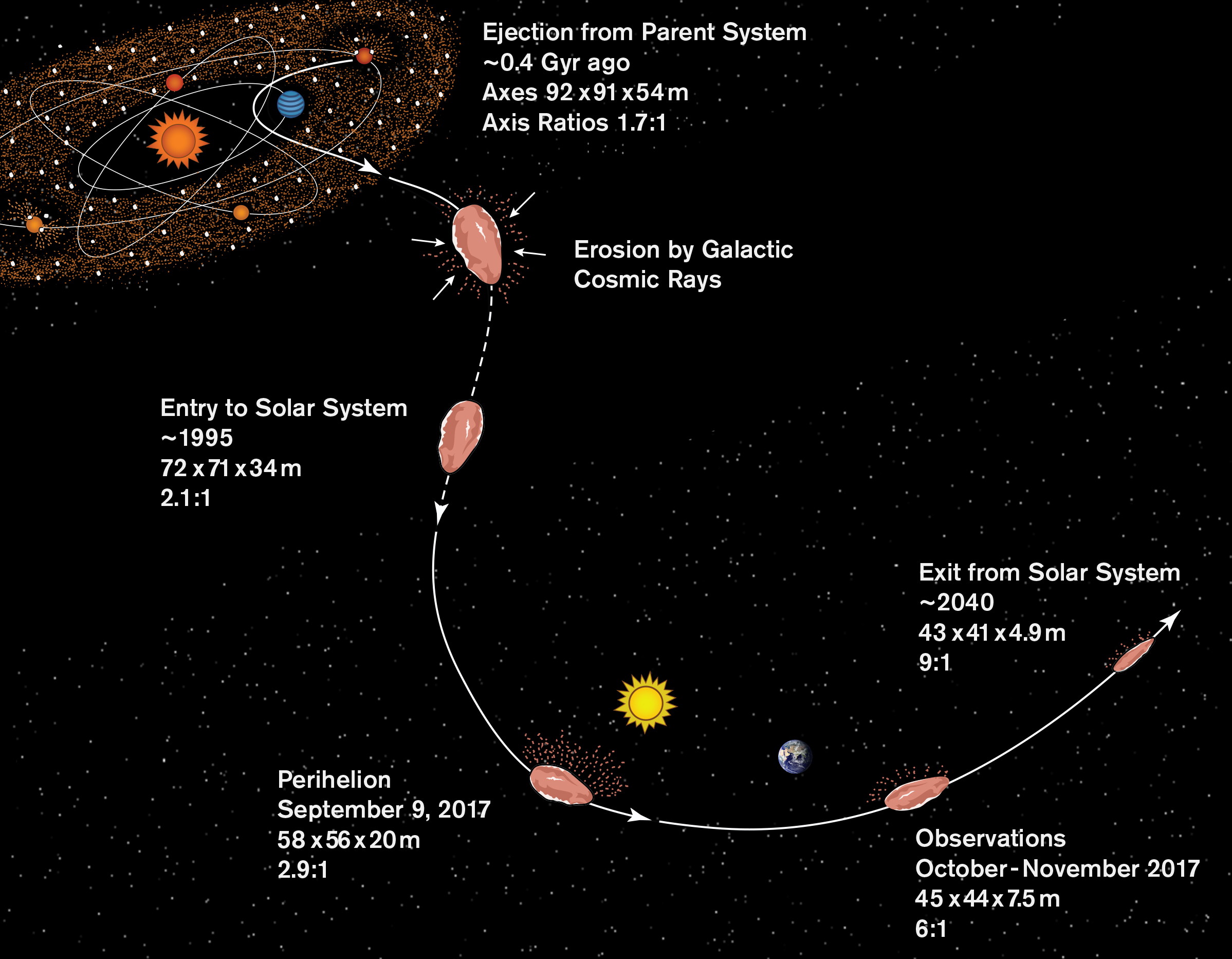 Illustration of a plausible history for ‘Oumuamua shows an origin in its parent system around 0.4 billion years ago; erosion by cosmic rays during its journey to the solar system; and passage through the solar system, including its closest approach to the Sun on 9 September 2017 and its discovery in October 2017. At each point along its history, this illustration shows the predicted size of ‘Oumuamua, and the ratio between its longest and shortest dimensions.
Graphic credit: S. Selkirk/ASU,

‘Oumuamua’s characteristics suggest it is likely made of solid nitrogen, like the surface of Pluto, according to the authors.

“It was likely knocked off the surface by an impact about half a billion years ago and thrown out of its parent system,” said Alan Jackson, an astronomer and planetary scientist at Arizona State University and coauthor of the new study. Jackson will present the research on Wednesday, 17 March at the 52nd Lunar and Planetary Sciences Conference.

‘Oumuamua likely wasn’t flat when it entered our solar system, but melted away to a sliver, losing more than 95% of its mass, during its close encounter with the Sun, according to Jackson.

“Being made of frozen nitrogen also explains the unusual shape of ‘Oumuamua. As the outer layers of nitrogen ice evaporated, the shape of the body would have become progressively more flattened, just like a bar of soap does as the outer layers get rubbed off through use,” Jackson said.

From observations of the object, Desch and Jackson determined several characteristics of the object that differed from what would be expected from a comet.

The object entered the solar system at a velocity a bit lower than would be expected, indicating that it had not been traveling in interstellar space for more than a billion years or so.

Its pancake shape was also more flattened than any other known solar system object.

The object acquired a slight push away from the Sun, a ‘rocket effect’ common in comets as sunlight vaporizes the ices they are made of, but the push was stronger than could be accounted for.

Finally, the object lacked a detectable escaping gas, which is usually depicted visibly by a comet’s tail.

“In many ways ‘Oumuamua resembled a comet, but it was peculiar enough in several ways that mystery surrounded its nature, and speculation ran rampant about what it was,” Desch said.

In all, the object was very much like a comet, but unlike any comet that had ever been observed in the solar system.

Desch and Jackson hypothesized the object was made of different ices and calculated how quickly these ices would sublimate (passing from a solid to a gas) as ‘Oumuamua passed by the Sun. From there, they calculated the rocket effect, the object’s mass and shape, and the reflectivity of the ices.

“That was an exciting moment for us,” Desch said. “We realized that a chunk of ice would be much more reflective than people were assuming, which meant it could be smaller. The same rocket effect would then give ‘Oumuamua a bigger push, bigger than comets usually experience.”

Chip off a Pluto-like block

Desch and Jackson found one ice in particular—solid nitrogen—that provided an exact match to all the object’s features simultaneously. And since solid nitrogen ice can be seen on the surface of Pluto, it is possible that a comet-like object could be made of the same material.

“We knew we had hit on the right idea when we completed the calculation for what albedo (how reflective the body is) would make the motion of ‘Oumuamua’ match the observations,” Jackson said. “That value came out as being the same as we observe on the surface of Pluto or Triton, bodies covered in nitrogen ice.”

Although ‘Oumuamua’s comet-like nature was quickly recognized, the inability to immediately explain it in detail led to speculation that it is a piece of alien technology.

“Everybody is interested in aliens, and it was inevitable that this first object outside the solar system would make people think of aliens,” Desch said. “But it’s important in science not to jump to conclusions. It took two or three years to figure out a natural explanation—a chunk of nitrogen ice—that matches everything we know about ‘Oumuamua. That’s not that long in science, and far too soon to say we had exhausted all natural explanations.”

Although there is no evidence that it is alien technology, as a fragment of a Pluto-like planet, ‘Oumuamua has provided scientists with a special opportunity to look at extrasolar systems in a way that they have not been able to before. As more objects like ‘Oumuamua are found and studied, scientists can continue to expand our understanding of what other planetary systems are like and the ways in which they are similar to, or different from, our own solar system.

Desch and Jackson hope that future telescopes, like those at the Vera Rubin Observatory/Large Synoptic Survey Telescope in Chile, which will be able to survey the entire Southern sky on a regular basis, will be able to start finding even more interstellar objects that they and other scientists can use to further test their ideas.

“It’s hoped that in a decade or so we can acquire statistics on what sorts of objects pass through the solar system, and if nitrogen ice chunks are rare or as common as we’ve calculated,” Jackson said. “Either way, we should be able to learn a lot about other solar systems, and whether they underwent the same sorts of collisional histories that ours did.”

Notes for Journalists
The two research papers will be free available for 30 days. Neither paper, nor this press release, are under embargo.

Paper titles:
“1I/’Oumuamua as an N2 ice fragment of an exo-Pluto surface: I. Size and Compositional Constraints”
Download a PDF copy of the paper here.

“1I/’Oumuamua as an N2 ice fragment of an exo-pluto surface II: Generation of N2 ice fragments and the origin of ‘Oumuamua”
Download a PDF copy of the paper here.