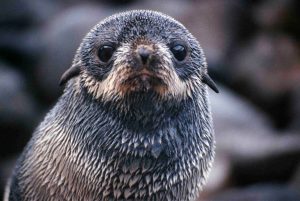 Many northern fur seal pups die on their initial migration from the Bering Sea to the North Pacific Ocean, but researchers are unsure why.
Credit: Jeremy Sterling.

Most northern fur seals breed on islands in the Bering Sea during the summer and embark on an eight-month-long journey to the North Pacific Ocean to forage for food in November and December of each year. For unexplained reasons, seal births have been declining there since the late 1970s, prompting increased research into the animals’ behavior. Researchers found many pups die during their initial migration from the Bering Sea to the North Pacific Ocean, but the rate at which this happens varies from year to year – and scientists are unsure why.

New research comparing the movements of individual seal pups during their migration with reconstructions of ocean surface winds shows that as wind speed increases, pups increasingly move downwind and to the right. The preliminary findings suggest surface winds could influence an individual pup’s displacement by hundreds of kilometers during their first winter migration.

It is unclear whether being blown downwind is helpful or harmful to the seal pups, but the results offer a new insight into environmental effects on seal survival, according to the researchers. A northern fur seal pup equipped with a satellite tag to track its location.
Credit: Mary-Anne Lea, University of Tasmania.

“They’re at the whims of what’s happening in the environment of the North Pacific Ocean,” said Noel Pelland, a physical oceanographer and National Research Council postdoctoral associate at NOAA’s Alaska Fisheries Science Center in Seattle, Washington, who will present the new research today at the 2018 Ocean Sciences Meeting, co-sponsored by the Association for the Sciences of Limnology and Oceanography, The Oceanography Society and the American Geophysical Union.

Northern fur seals are among the most long-studied marine mammals because of their historical importance to the fur trade. They have been a staple food of native Alaskans for thousands of years and have been commercially harvested for their fur since Europeans arrived in Alaska in the 18th and 19th centuries.

In the new research, Pelland and his colleagues analyzed data from more than 150 seal pups equipped with tags that allow satellites to track their movements. The researchers compared the pups’ movements to models of wind speed and intensity in the North Pacific from 1997 to 2015. This map shows where tagged seal pups went in 2005 and 2015. These illustrate the contrasts between years, in addition to showing where the pups go in general. These are portions of the pup tracks in November-December, just after they’ve left their birth islands. The tracks are overlaid on an 1895 chart that depicts the North Pacific Ocean and the understanding at that time of where northern fur seals traveled on their migration.
Credit: Noel Pelland/Proceedings of the Tribunal of Arbitration at Paris, Volume 7.

The researchers are unsure which scenario is better for pup survival, but the results confirm anecdotal evidence of seal migration behavior observed by native inhabitants of the Aleutian Islands, Pelland said.

In 1892, the U.S. Secretary of the Treasury sent Captain C. L. Hooper to the Aleutian Islands with instructions to gather as much information as he could about northern fur seals from the Aleuts who lived there and hunted them. The Aleuts consistently told Hooper seals always travel with a fair wind and disliked traveling against the wind.

“What’s cool is that with this project, we have this sophisticated technology that allows us this unprecedented look at the lives of individual animals, and what it allows us to do is quantify things that may have been known for millenia, by the people who’ve lived there and experienced this species,” Pelland said.

Notes for Journalists
Lead researcher Noel Pelland will give a poster presentation about this research on Tuesday, 13 February at the 2018 Ocean Sciences Meeting. The meeting runs from 11-16 February 2018, at the Oregon Convention Center, 777 NE Martin Luther King Jr. Blvd., Portland, Oregon, 97232. Visit the Ocean Sciences Media Center for information for members of the news media.

Abstract:
“Seals travel with a fair wind”: The influence of marine winds on the migration of newly-weaned northern fur seal pups